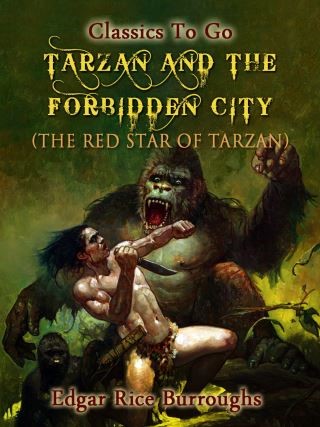 Tarzan and the Forbidden City

A young man named Brian Gregory has disappeared in Africa, looking for the fabled Father of Diamonds; his father and sister want to go rescue him, and they can only enlist Tarzan's help because they know Captain Paul D`Arnot. By chance, Tarzan and Brian are lookalike, thus making some vile scoundrels to think Tarzan is Brian. They are also heading out after the big old diamond. The Forbidden city is again in a secret valley, with two cities Ashair and Thobos in war, because of the Father of Diamonds. Tarzan has to fight many times against different foes, once even a man size unicorn seahorse! (Wikipedia)

Edgar Rice Borroughs: Edgar Rice Burroughs (September 1, 1875 – March 19, 1950) was an American writer best known for his creations of the jungle hero Tarzan and the heroic Mars adventurer John Carter, although he produced works in many genres.(Wikipedia)