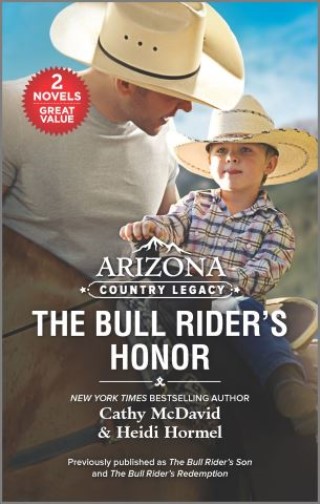 The right kind of hero

Cassidy Beckett has a secret she’s kept for six years: the identity of her son’s father. It doesn’t take the Easy Money Arena’s new bull manager, Shane Westcott, long to figure out Cassidy’s son is his nephew. Shane knows how important a father is to a child. He also knows the men in Cassidy’s life have let her down before. Can Shane convince Cassidy to face the truth without losing her trust…or his heart?

Clover Van Camp meets her match when her plans to turn a struggling Arizona town into a Wild West resort are blocked by the handsome mayor Danny Leigh. And to make things more complicated, she and the retired bull rider have tangled before. Danny knows Clover usually gets her way, but this time he won’t back down. Will Danny and Clover let their ambition keep their hearts divided?

Cathy McDavid: New York Times bestselling author Cathy McDavid has been happily penning contemporary westerns for Harlequin since 2006. Every day, she gets to write about handsome cowboys riding the range or busting a bronc.It's a tough job, but she's willing to make the sacrifice. Cathy shares her Arizona home with her own real life sweetheart and a trio of quirky pets. Her grown twins have left to embark on lives of their own, and she couldn't be prouder of their accomplishments.A former innkeeper and radio talk show host, Heidi Hormel has always been a writer. She spent years as a small-town newspaper reporter and as a PR flunky before settling happily into penning romances with a wink and a wiggle.

While living in the Snack Food Capital of the World, Heidi has trotted around the globe from Death Valley to Loch Ness in Scotland.