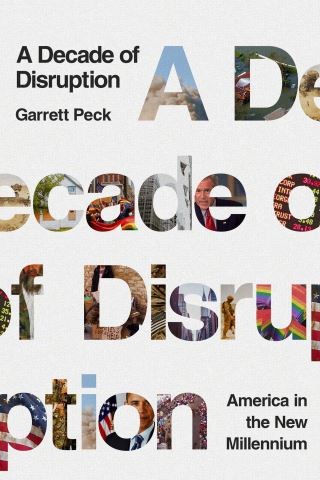 A Decade of Disruption

America in the New Millennium

An eye-opening history evoking the disruptive first decade of the twenty-first century in America.

Dubya. The 9/11 terrorist attacks. Enron and WorldCom. The Iraq War. Hurricane Katrina. The disruptive nature of the internet. An anxious aging population redefining retirement. The gay community demanding full civil rights. A society becoming ever more “brown.” The housing bubble and the Great Recession. The historic election of Barack Obama—and the angry Tea Party reaction. The United States experienced a turbulent first decade of the 21st century, tumultuous years of economic crises, social and technological change, and war. This “lost decade” (2000–2010) was bookended by two financial crises: the dot-com meltdown, followed by the Great Recession. Banks deemed “too big to fail” were rescued when the federal government bailed them out, but meanwhile millions lost their homes to foreclosure and witnessed the wipeout of their retirement savings. The fallout from the Great Recession led to the hyper-polarized society of the years that followed, when populists ran amok on both the left and the right and Americans divided into two distinct tribes. A Decade of Disruption is a timely re-examination of the recent past that reveals how we’ve arrived at our current era of cultural division.

Garrett Peck: Garrett Peck, the author of six books, is an American historian who serves on the advisory council of the Woodrow Wilson House in Washington, D.C. He has lectured at the Library of Congress, the National Archives, the National Museum of American History, and the Smithsonian Institution. He lives in Arlington, Virginia. Please visit his website at www.garrettpeck.com.